› Press Release › On October 24th, Drake is Celebrating His Birthday by Hooking Everyone up with Free Dave’s Hot Chicken

On October 24th, Drake is Celebrating His Birthday by Hooking Everyone up with Free Dave’s Hot Chicken 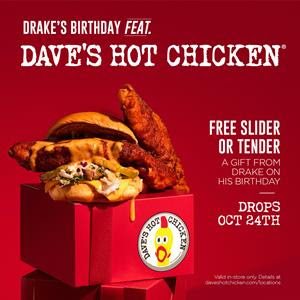 On October 24th, Drake is Celebrating His Birthday by Hooking Everyone up with Free Dave’s Hot Chicken

LOS ANGELES, Oct. 21, 2022 (GLOBE NEWSWIRE) — From an East Hollywood parking lot to becoming the Fastest Growing Restaurant Chain in America1; Dave’s Hot Chicken has come a long way in just five years. That journey includes a recent investment from Drake, who became an investor in the brand once he tried the food and met the founders, four longtime friends.

In celebration of his birthday and the company’s first advertising campaign, “Don’t Die Before You Try It,” Drake is hooking everyone up with a Dave’s Hot Chicken Slider or Tender, on him. The October 24 celebration is going on at every Dave’s Hot Chicken from 11am -9pm local time. To get in on the action, guests simply need to hit their nearest Dave’s Hot Chicken and show they follow the brand on Instagram or TikTok. In return, they’ll get a spiced-to-order slider or tender of their heat level preference. This celebration is only available when visiting the restaurant, and not online or through third-party delivery services.

The company’s ad campaign, Don’t Die Before You Try It, takes a tongue-in-cheek look at those who have met their fate through untimely and outlandish events, such as time travel, before having the opportunity to enjoy Dave’s Hot Chicken.

Dave’s Hot Chicken specializes in Hot Chicken Tenders and Sliders, along with sides of house-made Kale Slaw, creamy Mac & Cheese and crispy French Fries. Offered at seven spice levels ranging from No Spice to Reaper® (which requires a signed waiver for those who dare), each piece of hand-breaded chicken is spiced-to-order, using a spice blend crafted specifically for its heat level or no-spice. The brand began a few years ago as a parking lot pop-up and drew lines around the block, with rave reviews by its fanatic Instagram followers.

“Dave’s Hot Chicken will blow your mind! Every Tender is hot, juicy and spicy,” said Bill Phelps, Dave’s Hot Chicken’s CEO. “Our guests across the world have shown the same level of enthusiasm for this company that the founders had five years ago when they were operating a little pop up in Hollywood. Now, in celebration of his birthday and our first national ad campaign, our most famous investor wanted to give something back to fans by letting everyone try Dave’s Hot Chicken on him.”

About Dave’s Hot Chicken
In a modern-day American dream story, Arman Oganesyan and best friend Chef Dave Kopushyan, along with brothers Tommy and Gary Rubenyan, launched Dave’s Hot Chicken in a parking lot pop-up in 2017. Dave’s Hot Chicken quickly took off, opening its first brick-and-mortar restaurant in East Hollywood. In 2019, the team struck a deal with Wetzel’s Pretzels co-founder and former CEO, Bill Phelps, and movie producer John Davis to begin franchising the Dave’s Hot Chicken concept throughout the U.S. and beyond. The company has sold the rights to more than 700 franchise locations in the U.S., Middle East and Canada and will open an additional 25 locations this year. Harkening back to an Eater LA blog that helped propel early interest in the brand, the company’s mission is to “blow their minds.” Additional brand investors include Billboard’s Artist of the Decade, Drake, former California First Lady Maria Shriver, actor Samuel L. Jackson, and Good Morning America anchor and retired NFL player Michael Strahan.

A photo accompanying this announcement is available at https://www.globenewswire.com/NewsRoom/AttachmentNg/b582ddad-c23b-4eb1-ab87-64cfe4dfb8d3